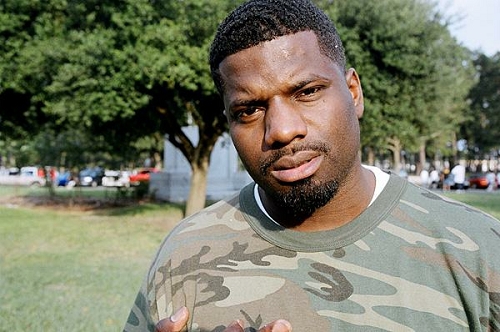 KB Da Kidnappa was born in Galveston, But originally from Port Arthur,Tx where his mother and all of his relatives were born and raised. While his mother was pregnant with him, she took a trip to Galveston, and while there went into labor and was rushed to the nearest hospital to give birth to a Legend. Back in Port Arthur, KB remembers living with his mother on E.15th st. across from the old whataburger and sometimes living with his aunt Erma on Thomas Blvd about a couple of blocks from Gilliam circle. When he was six years old his mother moved him along with his sister to Butzbach,Germany after getting married to man who was not KB's father, but was a member of the U.S Army. During the early years of his life, KB Da Kidnappa had no idea who his real father was. KB started school in Germany and became a regular visitor on the army base his stepfather was stationed at. He picked up an interest in guns and always participated in the field day festivals where he was actually allowed to fire assault weapons and all kinds of machine guns that fired blank rounds.
During this period of his life, he was also able to experience different styles of music from his mother, who played old records from disco to blues to classic rhythm and blues and funk. When he turned nine years old, his parents moved all of them back to the United states to Houston and became residents of 5th ward, and later on moved to the trinity gardens neighborhood. Soon after the move to trinity garden he experienced the divorce of his mother and stepfather. also, experiencing the struggle of being single parently raised on welfare.With his back against the wall and being between a rock and a hard place, he began to earn street credibility from selling cocaine and soon his weapons of choice fired live rounds. KB Da Kidnappa admits that he was influenced by the big time drug dealers from the neighborhood and could not resist the temptation and the lifestyle that came with the dope game. Besides selling dope, he picked up a new hobby of street rapping and participating in neighborhood rap battles. He went through different neighborhoods destroying other rappers and soon became the talk of the streets.
At age 16, he joined the infamous rap group "Street Military" and went on to do numerous records and street classics, but in the end finding out that the music business is 90% business and 10% talent. The lack of business skill and knowledge made it difficult for the group to survive through bad contracts and crooked record companies. During KB Da Kidnappa's career with street Military the group gained regional popularity in the streets and also featured on more than a dozen of screwed and chopped mixtapes by the late Legendary Dj Screw. With the street military years behind him, KB Da Kidnappa has went on to start his own record company called Spitting Venom Recordz. He is well educated in the music business now and owns the masters to all records released on Spitting Venom Recordz. In addition, KB Da Kidnappa has toured Australia and had write-ups in magazines that include Onion, Vibe, Murder Dog and Ozone. KB Da Kidnappa has also worked with well known artists such as Scarface, Bushwick Bill, Slim Thug, Zro, 8Ball & Mjg, Lil KeKe, Papa Reu and a host of other underground super stars.
KB Da Kidnappa is still on top of his game more than ever now, and releasing music through his own independent label has brought him true contentment., besides the fact that he now knows who his real father is and all his people on his father's side of the family that reside in St. Louis, Missouri. KB Da Kidnappa credits his start in music to his cousin Willie Washington, from Port Arthur, who taught KB how to rap at age 10. KB has stated that his spiritual trinity is god, family, and music and he acknowledges that creating music will be a part of him until the day he dies. Even after death my music will still live - KB Da Kidnappa.