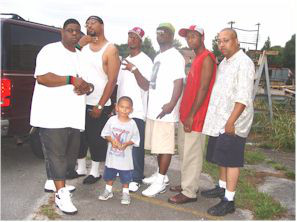 Slave Kamp was created by GMAN (Geoffrey Robinson) in ’93 and started off with JQ (Jarvis Qualls), Whyze Up (Sean Alexander), Laylo (Terrance Casey), and D.J. 7-11 (Johann Robinson). This number grew “Wu-Tang style” over the next couple of years as other underground lyricists and producers from Alabama, Tennessee, and Georgia began supporting and performing with group. A family was born, and by 1996, the Kamp’s music was being played all over Alabama via mix tapes, demos, and their first full length underground tape, which included the instant underground hit “Us vs. Them”.

Slave Kamp’s sound is southern cooked with a unique flavor. The music and the message speaks for itself. Those who listen primarily to the beats will automatically be hooked to the bass driven tracks complimented by the original (no samples) sounds of southern blues/jazz/soul inspired music. Heads who peep out the lyrics will no doubt be impressed by, not only the skills of these talented poets, but the overall positivism of the group's message.