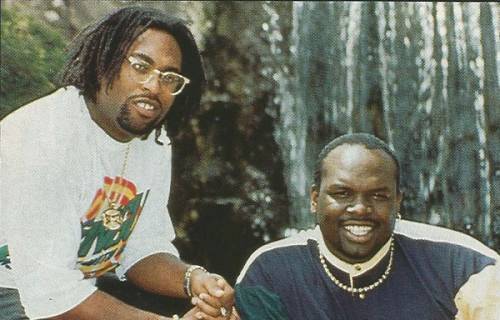 Tag Team is an American hip hop/pop rap duo from Atlanta, Georgia. Best known for their 1993 multiplatinum single, "Whoomp! (There It Is)", which has been featured in a number of advertisements, films, and TV shows, Tag Team now performs for audiences nostalgic about music from the 90s. The duo is made up of Cecil Glenn (DC the Brain Supreme) and Steve Gibson (Steve Rolln). The group performs regularly at corporate events, charity fundraisers, 90s tours, casinos, and halftime shows for collegiate and professional sporting events.

TIn the early 90s, Tag Team broke stereotypes about the hip-hop genre by demonstrating that there is more to hip-hop than inflammatory lyrics. The success of "Whoomp! (There It Is)" represented a milestone in the history of hip-hop because it has been enjoyed by culturally and generationally diverse audiences, and the interactive, participatory nature of the music gives it an appeal that has lasted over the years.

DC Glenn was born in Chicago, IL, and Steve Gibson was born in Omaha, NE. Both moved to Denver, CO, as young children. They met at Manual High School in 1982, where both pursued their musical interests. Gibson played drums in the jazz band and attended audio engineering classes at an early college education program, while Glenn sang as a tenor in Manual High School’s Bolt Vibrations Chorus.

They began to develop as hip-hop artists in their youth, but the musical style of Tag Team originated with an alchemy of influences that took place after they moved to Georgia and were exposed to Southern Bass. In 1988, Gibson enrolled in the Art Institute of Atlanta to study studio engineering. Glenn followed shortly after, leaving Sacramento, CA, where he had been attending Sacramento State University. It was in the South that the two were inspired by artists such as Success N Effect and Kilo Ali as they explored the roots of the Southern hip-hop genre. In 1990, Gibson and Glenn released their first 12-inch single, “Strictly Political,” as Tag Team Crew.

In August of 1992, Tag Team recorded “Whoomp! (There It Is)”. At that time, Glenn was working as the main DJ at a gentlemen’s club in Atlanta called Magic City which would later become recognized as a hub of Atlanta Hip-Hop and rap music. Glenn played the track in the club on the same day it was mixed. “Whoomp!” received the biggest crowd response he had ever seen as a DJ. In the following months, people requested it so often that it became clear the song had the potential to become a hit. The single was shopped to and rejected by multiple record labels because executives were unfamiliar with Southern Bass and were unsure if the sound would sell well around the country. Glenn instead borrowed $2,500 from his parents to press 800 records. The singles quickly sold out in Atlanta on word of mouth alone.

A representative from Mercury Records ultimately pointed them in the right direction, suggesting that the best person to promote music from the Southern Bass genre was Staxx Record mogul, Al Bell. Glenn reached out to Bell. Bell agreed to sign Tag Team without even hearing the song. Bell reportedly told Glenn, “I don’t need to hear the record. I hear it in your spirit.”

Within months, “Whoomp!” reached the top position on the Billboard Hot R&B/Hip-Hop chart, and Hot 100 Single Sales chart. The record held the #2 spot on the Billboard Hot 100 for seven weeks straight and reached platinum status, a distinction bestowed on artists who have sold at least a million copies. In February 1994, it received its fourth platinum certification. The song resonated with a variety of audience types, and for that reason, it has been used at sports events and in motion picture productions, such as Elf, Shark Tale, Beverly Hills Chihuahua, and D2: The Mighty Ducks.

A similar song, "Whoot, There It Is," was released by the Miami-based group 95 South a month prior to Tag Team's "Whoomp!" Both groups' record companies maintained that the similarities were a coincidence, as the phrase, "Whoomp (or whoot), there it is," was a common expression used by dancers in Atlanta and Miami nightclubs where members from both groups spent a lot of time. Arsenio Hall hosted both groups on his show to perform their versions of the songs and let viewers vote on their favorite by calling a 900 number to donate money to the relief effort for the 1993 Midwest Floods.

Lyrically and musically, critics and listeners have pointed out the song’s positive and uplifting vibe. The phrase “Whoomp! There it is!” has come to mean something similar to “Look at that!” It is intended to encourage “positive partying”. In interviews, Glenn and Gibson have discussed the conversation in which they decided to use the phrase. Glenn said, “Oh, man, we need to do a song called, ‘Whoomp, there it is’”. Gibson was on board immediately, replying simply, “How do you spell it?” Tag Team has explained that the phrase is about “anything that one agrees with on a positive level”.

“Whoomp! (There it is!)” also has a unique beat and baseline that fans sometimes refer to as "whoomping." “Whoomp” has been called “Da bomb party song” of the 90s by Atlanta Magazine and “among the country’s most commercially successful singles of all time.